The welcome warmth of the bonfire dried our hands and took the chill off while we giddily rehashed our first experience in the woods with Stella and Sunny. We were surrounded by Douglas firs rising above our heads, atop a hill overlooking historic vineyards and hazelnut orchards in the distance. Beneath our feet was Savannah Ridge, the small backbone of sedimentary rock laid down over millions of years by ancient oceans, lava flows, and most recently, the Missoula Flood. (As “recent” as fifteen thousand years ago.) The latter are facts only geologists and wine growers are passionate about.

We were comrades who had just crisscrossed the spongy forest floor for two hours, bouncing from one spot to the next behind Stella, the Lagotto Romagnolo, and her intrepid owner, Sunny Diaz. Stella’s got a keen nose and propensity for praise. Sunny is driven by connection - to the natural world and to her foodie-inclined, forest-christened pupils. Stella is driven by treats, every once in a while that’s a small white truffle that she gets to before anyone else notices she’s unearthed it. Both are adept at finagling fruiting bodies from the earth and delivering them to the people best at wrangling their intoxicating aromas: the Pacific Northwest’s best chefs and bartenders.

Prior to the 17th century, truffles were eaten by peasants, hunted by farmers and pigs who learned to harness the sow’s natural predilection for these “diamonds of the earth,” as Brillat-Savarin would come to call them. Before they were considered aphrodisiacs by well-to-do diners, they actually were aphrodisiacs for the sows who mistook the volatile compound dimethyl sulfide found in truffles, for andrestenol, a sex pheromone in boar saliva. These days a white truffle shaved over buttery, cheese-laden pasta noodles almost elicits the same response from truffle lovers around the world as it did for the humble sows of yesteryear.

These days truffles are a very expensive delicacy in many parts of the world, with the white Alba truffle from Italy commanding up to $4000 US per pound and the Perigord from France coming in around $1600 US. Oregon truffles, by comparison, fetch only about $400 per pound. Why is that, you ask? Unfortunately, we’re considered “the bad boys of the group,” but not in the James-Dean-Rebel-Without-a-Cause way. While most Oregonians, including James Beard in the late 70’s, proclaim that Oregon truffles rank up there with the best in the world, we have suffered from a bad reputation on the world stage.

One factor for this is our market is much younger and less developed. In France, cultivation of truffles has been productive since America declared its independence from Britain. In fact, according to Wikipedia, back in the 1700’s the French figured out they could cultivate truffles by planting acorns from truffle-producing trees. Today 80% of truffles produced in France are cultivated, rather than wild foraged. On the other hand, it’s still a bit too early to tell if American truffle groves are sustainably producing because it takes at least 10 years to develop the mycorrhizal network that will sustain a crop.

Perhaps the biggest reason for our being snubbed, though, is because we have a habit of raking in the PNW. It’s perfectly legal here to head out into the forest with nothing but a rake and a prayer on the hunt for truffles. The problem with raking is that you’re harvesting all of the truffles in the ground, ripe or unripe, and unripe truffles are useless, culinarily-speaking. Unripe truffles taste like nothing and are lacking in the intoxicating aroma that is the reason we want to eat them in the first place! In Italy, by contrast, it is a law that truffles must only be hunted with the aid of a dog’s nose, ensuring only the most pungent are harvested. Since Americans don’t have a long culinary tradition of coveting only those most stinky, we have used both in our cooking to our reputation’s detriment.

However, Oregon truffles are on par with those from Italy and France and attitudes are changing due to the good work of people like Sunny Diaz and the folks at the Oregon Truffle Festival. Charles LeFevre, forest mycologist, New World Truffieres founder and OTF co-founder, was quoted in a New York Times article as saying, “... industry oversight to ensure the use of dogs, combined with cultivation efforts and careful management of the truffle habitat, could raise the value of Oregon’s crop (worth $300,000 to harvesters at the time) a hundredfold by 2030, and benefit the region’s economy through increased sales, exports and culinary tourism.” As Bob Dylan fatefully sung, the times they are a-changin.

Meanwhile, back in the Doug Fir stand, Sunny describes black truffles as fruity on the nose, think tropical fruits with a musky amaretto and vanilla finish, to a group of foodies and industry folks. White truffles are a bit different: garlicky, nutty and faintly citrusy. We experience this immediately as Stella has zeroed in and starts digging at the base of a Douglas Fir. After a few seconds, anyone standing within a 3 foot radius is hit by the intense garlic aroma of an Oregon winter white (Tuber oregonense). Sunny plucks it out of the ground and Stella is rewarded with a treat from Sunny’s hip pouch, and off she goes again, nose to the ground, her long, neon orange leash trailing behind her. Next stop: a multi-course, post-foraging meal, made all the better by wine and my new forest-baptized compatriots. 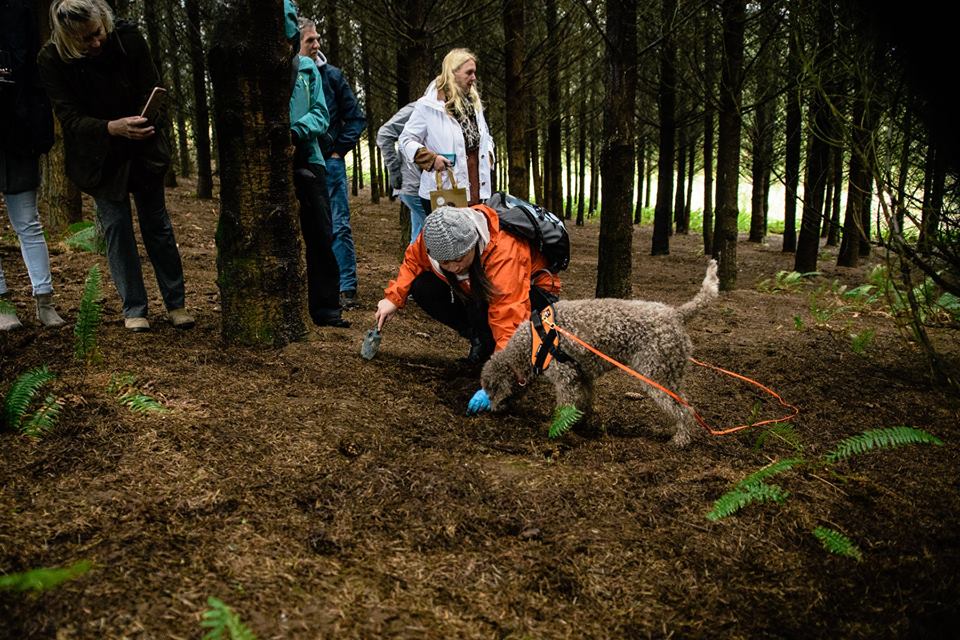 Stay tuned for more truffle stories in the coming weeks, or sign up for a foray and create your own truffle-scented memories!